What's New
Through the conflict, life carries on in Ukraine
A FOCUS on Mission
Must Patience Be So Slow?
Harold Jantz: A Heart for the Mennonite Story
Lorlie Barkman: A Life of Creative Engagement
Last Days, First Days
Women in Ministry: Bertha Dyck
January Moment in Prayer “Holy Spirit—Fill Us!”
The Church as the Patient Body of Christ
Advent: Making Much of Jesus: Christmas Day
Home Martha Peters 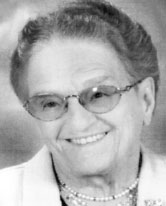 Martha confessed Jesus as Saviour in 1937. She worked at the Saskatoon Convalescent Home. Martha and Dan began married life on Dan’s parents’ farm, then in 1952, moved to their own dairy farm in the Sandhills. They moved to Langham, Sask., in 1956, to Osler, Sask., in 1960, and to Saskatoon in 1967. Martha and Dan experienced spiritual renewal through the ministry of the Sutera Twins at the 1971 Saskatoon Revival. Martha enjoyed family vacation to St Louis, Mo., in 1975, and Disneyland in 1989. After Dan’s death, Martha found the empty house overwhelming, and moved to West Portal (Sask.) Manor Condos in 1997. Hardworking and supportive, Martha’s greatest joy was serving her family by washing walls, doing dishes, hosting gatherings or praying.