What's New
A FOCUS on Mission
Must Patience Be So Slow?
Harold Jantz: A Heart for the Mennonite Story
Lorlie Barkman: A Life of Creative Engagement
Last Days, First Days
Women in Ministry: Bertha Dyck
January Moment in Prayer “Holy Spirit—Fill Us!”
The Church as the Patient Body of Christ
Advent: Making Much of Jesus: Christmas Day
Advent: Making Much of Jesus: Fourth Advent
Home Marion June Goertzen 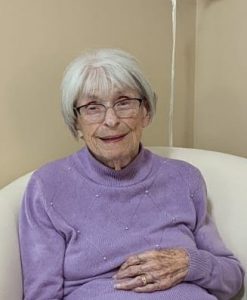 Marion grew up in Turtle Creek, a suburb of Pittsburgh, Pennsylvania, the youngest child of John and Agnes Cook, a sister for John, William, and Dallas. Hers was a happy childhood, though her mother died when she was only 9. One memory stands out: 12-year-old Marion walking home from the Baptist church, feeling like she was walking on air, because she had given her life to the Lord. She went to New York to study at Practical Bible Training School. She also took a year of nurse’s training before applying with The Evangelical Alliance Mission for missionary service. She travelled to India in 1952 where she met, and later married, Henry. Marion’s first son was stillborn, but a year later she gave birth to Stanley. Her daughter Sandra was born 2 years later in the city of Jhansi. While in India, Marion and Henry started a Bible correspondence course ministry called Light of Life which sent Bible courses throughout all of India in various languages. Marion looked back with special fondness on this time with the feeling she had done what God had called her to do. In 1970 the couple returned to Abbotsford for a year of home assignment and to welcome their third child, Paul, into the family. When their visa to return to India was denied, the family moved to Trinidad in 1973, where they served 4 years, Marion as the mission bookkeeper. They returned to Abbotsford in 1977 and provided a stable home for their adolescent children. Marion worked at the Clearbrook Credit Union (now Envision Financial). She began at an entry level position, filing cheques, but ended up as executive secretary to the bank manager. The type of person who only knew friends, Marion was kind, hospitable, a good conversationalist, and an excellent cook known for her pie crusts and Indian cuisine. Marion enjoyed her more than 20 years at Menno Terrace West, Abbotsford. In her early years there, she organized activities and led Bible studies. She was thrilled when her best friend of 40 years, Lillian Johnstone, moved in across the hall. Marion’s gratefulness was especially evident in the trials at the end of life. She often said, “This is a good place to be; people are so nice to me,” even if it was the overflow area of the ER. Marion loved her family and her family loved her. Above all, she loved Jesus and looked forward to going home to heaven. She will be missed by all who knew her.