What's New
A FOCUS on Mission
Must Patience Be So Slow?
Harold Jantz: A Heart for the Mennonite Story
Lorlie Barkman: A Life of Creative Engagement
Last Days, First Days
Women in Ministry: Bertha Dyck
January Moment in Prayer “Holy Spirit—Fill Us!”
The Church as the Patient Body of Christ
Advent: Making Much of Jesus: Christmas Day
Advent: Making Much of Jesus: Fourth Advent
Home Marion Aileen Sales 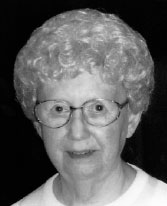 Marion worked as a payroll clerk at General Steel. After WWII, jobs were scarce, so the family moved to Victoria, where Marion again found payroll work. She met Jack through friends at church. Marion and Jack taught Sunday school in Langford, B.C. In the mid-50s, after Jack’s father died, his mother lived with them. They spent holidays with Jack’s brother Bob in Bamberton Park, B.C. When their children were in Boys’ Brigade and Pioneer Girls, Marion and Jack took leadership roles. Through their many moves, Marion made every house a home. When Jack started a plumbing enterprise, Marion was his payroll clerk. They enjoyed camping and visiting friends from Nova Scotia to Florida. Marion was a devoted grandma who taught her grandchildren to read and count. In 2007, Marion moved to Tabor Home where Jack visited her daily. After she lost her speech, she communicated with hand squeezes. Marion loved listening to choirs. Even as her health declined, she was known for her sweetness.