What's New
Through the conflict, life carries on in Ukraine
A FOCUS on Mission
Must Patience Be So Slow?
Harold Jantz: A Heart for the Mennonite Story
Lorlie Barkman: A Life of Creative Engagement
Last Days, First Days
Women in Ministry: Bertha Dyck
January Moment in Prayer “Holy Spirit—Fill Us!”
The Church as the Patient Body of Christ
Advent: Making Much of Jesus: Christmas Day
Home Margaret Janzen 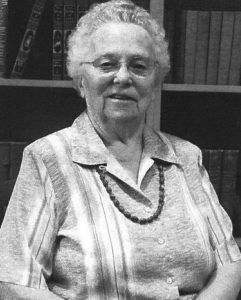 Margaret’s father was arrested in 1929 for wanting to retain his land. He died in prison in 1932. The family of 8 was to be sent to Siberia, but could stay if they left their house and barns. They moved into a relative’s summer room. Without the right to earn money, they were paid in wheat, which was often confiscated. In 1938, a brother was taken and never heard from again. In 1941, Margaret and her brother were told to drive cattle farther from the Germans. When the German army caught up to them and fired, they fled. Returning, they found their family had been taken. The 2 struggled to live for the next 2 years. As newlyweds, Margaret and Vic took a horse and wagon to the Polish/Ukrainian border, then a train to occupied Warthegau. Vic was forced to serve the Germans as fireman. In 1945, the front moved closer, so Margaret and their baby caught the last train west, arriving in Germany. After the war, she found Vic with the help of the Red Cross and MCC. Near Bremerhaven refugee camp, Margaret accepted Jesus as Saviour after hearing the gospel. In 1948, the family immigrated to Canada, settling in Arnold, B.C., then Burnaby and Vancouver. Margaret and Vic travelled Europe, Canada, U.S.A. and Panama. Margaret loved her family dearly.