What's New
Through the conflict, life carries on in Ukraine
A FOCUS on Mission
Must Patience Be So Slow?
Harold Jantz: A Heart for the Mennonite Story
Lorlie Barkman: A Life of Creative Engagement
Last Days, First Days
Women in Ministry: Bertha Dyck
January Moment in Prayer “Holy Spirit—Fill Us!”
The Church as the Patient Body of Christ
Advent: Making Much of Jesus: Christmas Day
Home Margaret Boldt 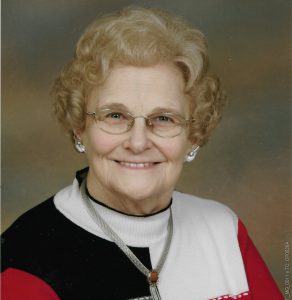 Margaret had a happy childhood. She began violin lessons at 8 and was invited to become a charter member of the Kitchener-Waterloo Symphony at 15. She competed in track and field sports, winning many trophies. Margaret was an active lifelong member of Kitchener MB Church, where she sang in the church choir and trios, and played her violin. Her church work also included Pioneer Girls and vacation Bible school. After marrying Ed, she worked at Economical Insurance, Waterloo, and later was a secretary at Howard Robertson Public School, Kitchener. Margaret was a devout Christian who prayed faithfully for friends and family, and an avid reader, knitter, and cook. She spent many happy summers with her family at their cottage at Chesley Lake, Ont. Her loving presence touched many lives all over the world. In retirement, Margaret and Ed taught English as an additional language for one year at Nanchong Teachers College in China. They were evacuated following the Tiananmen Square massacre. Two years later, they accompanied three students from Tabor College, Hillsboro, Kan., to teach in Russia. They also travelled extensively in Europe, Africa, Canada, and the USA. Margaret’s last three years were spent at Parkwood Mennonite Home, where she received compassionate care.