What's New
“I’m Sorry” : Pope Francis addresses a “deplorable...
A matter of love: Reframing abortion
“Any chance you might be expecting a goldfish?”
Abortion, the image of God, and faithful witness...
Choosing motherhood: The sacrifice of honouring life
MWC Assembly small but full of joy
Bad back doesn’t hold back MDS volunteer
Transition in CCMBC National Faith and Life Leadership
Leading through the trauma of covid: Part three...
The church distracted: When the main thing is...
Home Magdalena Sommer 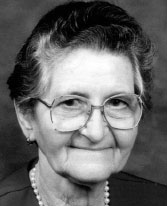 Magdalena’s family immigrated to Buenos Aires, Argentina, when she was 2 and stayed 4 years. She grew up in Paraguay, and after her mother’s death, returned with her family to Argentina. Here she met Arthur, and they raised their family. Magdalena began attending church at 35. In 1961, she accepted Jesus as Saviour and was baptized the following year. In 1976, the family immigrated to Canada, settling in Vancouver. After Arthur’s death, Magdalena moved near her friend Lydia Isaak in Abbotsford, B.C. When her health declined, she moved into Tabor Home. Magdalena was grateful to God for forgiveness and belonging.