What's New
Through the conflict, life carries on in Ukraine
A FOCUS on Mission
Must Patience Be So Slow?
Harold Jantz: A Heart for the Mennonite Story
Lorlie Barkman: A Life of Creative Engagement
Last Days, First Days
Women in Ministry: Bertha Dyck
January Moment in Prayer “Holy Spirit—Fill Us!”
The Church as the Patient Body of Christ
Advent: Making Much of Jesus: Christmas Day
Home Lillian M. Stobbe 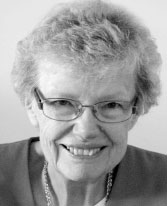 After graduating from Mennonite Educational Institute, Abbotsford, B.C., Lillian worked 8 years at Abbotsford’s post office. She obtained her BRE from MB Bible College, Winnipeg, and moved to Hillsboro, Kan., to work at the MB board of general welfare. She served in Germany with the Cornie Balzers in radio ministry. She returned to Winnipeg in 1970 to become bookkeeper and secretary to the president at MB Bible College for 27 years. In retirement, Lillian became an invaluable volunteer for Family Life Network (now Square One World Media), Ten Thousand Villages and River East MB Church. She was an active member of Christian Business and Professional Women’s organization, including a stint as president, and was a long-term committee member of the Singles Fellowship (Inter-Mennonite). She served as secretary treasurer of the Mennonite Community Orchestra. For 44 years, Lillian belonged to a singles bowling club. In 2005, she moved to Parkside Plaza, Winnipeg, where she made new friends.