What's New
Multiply September Ukraine Updates
Volunteers in B.C. honour Leamington woman tragically killed...
Delete or not to delete, that is the...
Believers bring water for drought baptism
Encouragement to those in the arena
Keeping attention and making an impact: A few...
Open hands to reconciliation
From the editor
Approaching truth and reconciliation with love in our...
MB Seminary offers new MA in Transformational Leadership...
Home Liese Giesbrecht 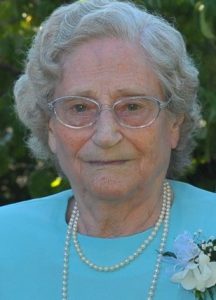 Liese was born in Communist-occupied Ukraine, where her family had to pray in secret. She went to school for 5 years: the first 2 in German, 3 in Russian. She had to help cultivate crops, load wagons, pack down cargo, and work with silkworms. When the Germans removed German-speakers from Russia, the family fled with their 2 horses, 2 cows, and a sheep, sleeping in lice-infested sheds and wintering in a school. In Poland, Liese was sent to a girls’ work camp, where she studied, cleaned, cooked, played, and swam. When the war ended, Liese and her friends fled to Germany. The girls worked at a farmhouse until a Russian soldier helped them cross into the British zone and they reunited with their families. Liese’s appendix burst, putting her in hospital for 3 months. She gave her life to God and was baptised with her sister Maria. In 1948, with MCC’s help, the family travelled on the Heinzelman to Argentina and by train and wagon to Paraguay, where Liese met Henry Giesbrecht. They married and, in 1958, immigrated to Vancouver, Canada. They built a house in Richmond, B.C., in 1980. Liese and Henry hosted gatherings and babysat grandchildren often. They travelled to Palm Springs, Arizona, and Hawaii, cruised the Panama Canal, and toured Europe. Liese saw Hong Kong with her sister Tina. Liese and Henry served Culloden MB Church for more than 30 years beginning with its launch in 1968: Liese sewed MCC quilts; Henry ushered. In 2001, Henry was diagnosed with terminal cancer in June and died that November. Liese moved closer to friends and family in Abbotsford in 2003, staying at Evergreen Village for 17 years. She enjoyed walking to her church, Clearbrook MB. Liese loved reading, sewing, knitting, crocheting, games, and puzzles. She decorated hundreds of hangers. Liese suffered arthritis pain. After her 2015 surgery, her health issues increased. She had an incredible memory, deep love, and strong faith; she prayed for her family daily. On her 92nd birthday, she moved into Tabor Court.