What's New
Through the conflict, life carries on in Ukraine
A FOCUS on Mission
Must Patience Be So Slow?
Harold Jantz: A Heart for the Mennonite Story
Lorlie Barkman: A Life of Creative Engagement
Last Days, First Days
Women in Ministry: Bertha Dyck
January Moment in Prayer “Holy Spirit—Fill Us!”
The Church as the Patient Body of Christ
Advent: Making Much of Jesus: Christmas Day
Home Lena (Janzen) Block 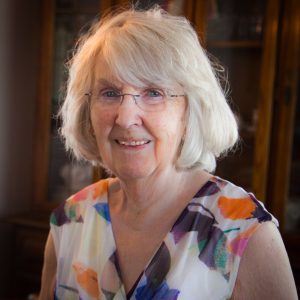 Lena was born to recent emigrants from Russia. The family moved to B.C. in 1932, settling on a farm near Yarrow. Their home grew to include 10 children. Faith and prayer were Lena’s foundation. At 11, she accepted Jesus as Saviour. Her baptism testimony quoted Psalm 107:1. Lena became engaged to Jack Block in summer 1947 and they married that fall. Thankfulness and loving kindness sustained her as a young wife and mother of three. She cared for the family while Jack completed his degree at University of B.C. As Jack’s career carried them to Edmonton and Ponoka, Alta.; Vancouver Island and Lower Mainland, B.C., Lena was the family’s bedrock. She modelled lifelong learning. After completing high school credits at night school in the 1960s, she earned a BA from Simon Fraser University in 1979 and developed her skills as a seamstress, painter, photographer, and enthusiastic computer user. Lena loved Ephesians 2:8-9, a passage that captures the humble spirit with which she served others, whether singing in the church choir, visiting those in hospital, participating in children’s ministries, or volunteering at the MCC Thrift Shop. She faithfully gave her time and energy until illness made it difficult to continue. Jack was the love of Lena’s life. She won the hearts of her children, grandchildren, and great-grandchildren, building relationships through trips and activities. Weekends and holidays found the family enjoying Skaha Lake or Osoyoos, or skiing at Manning Park, often including other families in their outings. For Jack and Lena’s 50th anniversary, the family took an Alaskan cruise. Although sports weren’t her favourite pastime, Lena always supported her family, even learning to ski at 40. Everyone loved her for her kind, generous spirit. She often quoted John 20:31. Lena was thankful to the end for God’s promises which “provided assurance of his love and care for us, comfort, and hope for the future.” Lena was a devoted wife, mother, grandmother, and great-grandmother, an accomplished homemaker, and above all, an encourager of those around her.