What's New
Multiply September Ukraine Updates
Volunteers in B.C. honour Leamington woman tragically killed...
Delete or not to delete, that is the...
Believers bring water for drought baptism
Encouragement to those in the arena
Keeping attention and making an impact: A few...
Open hands to reconciliation
From the editor
Approaching truth and reconciliation with love in our...
MB Seminary offers new MA in Transformational Leadership...
Home Lena Edna (Goertz) Janzen 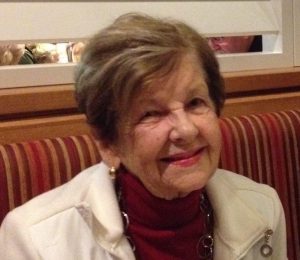 Edna was the second child born in Canada to Mennonite refugees from South Russia, joining older siblings who had emigrated with their parents and grandparents under the auspices of Mennonite Central Committee. In 1936, the Goertz family moved to B.C., homesteading in the Coghlan area of the Fraser Valley. They moved into their first home in 1937 and were founding members of the United Mennonite Church. When a Bible school opened at Coghlan, Edna was in the first class, and found a personal relationship with Jesus there in 1941. She was baptized in 1943; church membership followed in 1945. She went on to high school in Langley Prairie, finishing in 1948. She met Eddie Janzen that summer at a baseball game; he was playing for a different church and took the girl who had heckled him out for an ice cream float after the game. Edna and Eddie married in the United Mennonite Church July 20, 1950. They moved to New Westminster for work, and later to Coquitlam to raise a family. They were long-time members of the Mountainview Mennonite Church (formerly Vancouver Mennonite Mission), founded for young couples like themselves who wanted to raise their children in the faith of their fathers, albeit in English. In later years, she was a member of Riverside Community Church, Port Coquitlam, B.C., pastored by her younger son and his wife. Edna was an accomplished homemaker, excelling in baking, cooking, and preserving, and delighting in motherhood. She was a Sunday school teacher for many years, and when the 100 Huntley Street TV program began showing in Vancouver, she became a telephone counsellor until she and Eddie retired. She was widowed in 2011. Edna was hospitalized for a stroke in late September 2020. A few weeks later, she suffered a second stroke, and went home to glory Oct. 25, 2020.