What's New
Through the conflict, life carries on in Ukraine
A FOCUS on Mission
Must Patience Be So Slow?
Harold Jantz: A Heart for the Mennonite Story
Lorlie Barkman: A Life of Creative Engagement
Last Days, First Days
Women in Ministry: Bertha Dyck
January Moment in Prayer “Holy Spirit—Fill Us!”
The Church as the Patient Body of Christ
Advent: Making Much of Jesus: Christmas Day
Home Kornelius (Neil) Peters 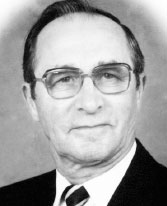 Neil’s family immigrated to Canada in 1926, settling in Saskatchewan. At 15, Neil got into a government winter program, working on Henry Klassen’s farm (for $5 a month), where he got to know the Klassens’ 12-year-old Tina. Neil and Tina started their life in Abbotsford, B.C., working at seasonal jobs until he found work in the plywood mill in Vancouver. They moved to Burnaby, B.C., and served Willingdon Church. They cared for many foster children. Neil worked as custodian for the hospital in Penticton, B.C., until his retirement in 1986. Neil and Tina had faithfully supported missionary to Mexico, Martha Braun. A year after Tina died, Neil and Martha married, in answer to Tina’s mother’s prayers. In 2002, Neil’s health declined, and Neil and Martha moved to Menno Terrace, where they enjoyed singing, bowling, and new friends. His favourite hymn was “On Christ the solid rock I stand,” and his favourite verses were Psalm 62:1–2.