What's New
A FOCUS on Mission
Must Patience Be So Slow?
Harold Jantz: A Heart for the Mennonite Story
Lorlie Barkman: A Life of Creative Engagement
Last Days, First Days
Women in Ministry: Bertha Dyck
January Moment in Prayer “Holy Spirit—Fill Us!”
The Church as the Patient Body of Christ
Advent: Making Much of Jesus: Christmas Day
Advent: Making Much of Jesus: Fourth Advent
Home Katherine (Reimer) Dueck 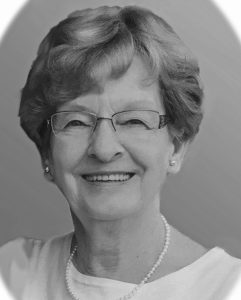 Kathy grew up in a loving family. Her faith in God never wavered, although in her battle with cancer she often wondered why God did not seem to answer her prayers. Kathy met Abe while attending MB Bible College (MBBC), Winnipeg, 1959–62. They married in 1965, and in 1968, moved to Durham, N.C., for Abe’s studies at Duke University; finances were sparse, but the times were happy. Christmases and summers took them back to Kathy’s beloved Kitchener. The trips through Virginia, Pennsylvania, and New York were enjoyable. The family returned to Winnipeg, where Abe’s MBBC colleagues and their spouses became Kathy’s community. Kathy deeply loved her grandchildren, and they returned love in rich measure. Kathy was proud to be a teacher and used her teaching gifts to help her children and grandchildren, often reading to them and singing with them at the piano. She was River East MB Church librarian for years, a task she found it difficult to give up. In retirement, Kathy and Abe travelled to Israel Palestine, Ukraine, South America, Australia, and New Zealand, of which she joyfully prepared detailed photo albums. Kathy enjoyed reunions with siblings every fall. Just months after celebrating their 50th wedding anniversary at Riding Mountain National Park in 2015, Kathy noticed her energy lagging. She was diagnosed with a rare leukemia. During that first year, Kathy and Abe continued to travel. Kathy remained as active as possible and refused to give up the will to live.