What's New
A FOCUS on Mission
Must Patience Be So Slow?
Harold Jantz: A Heart for the Mennonite Story
Lorlie Barkman: A Life of Creative Engagement
Last Days, First Days
Women in Ministry: Bertha Dyck
January Moment in Prayer “Holy Spirit—Fill Us!”
The Church as the Patient Body of Christ
Advent: Making Much of Jesus: Christmas Day
Advent: Making Much of Jesus: Fourth Advent
Home Katherine Dick 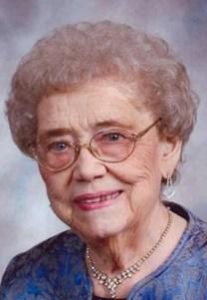 When Katherine was 1, the family immigrated to Canada, settling in Watrous, Sask. Despite few possessions, laughter resonated throughout her home. In her early teens, through the influence of an evangelist, she chose to follow Jesus. Katherine’s first calling was mother and homemaker. She and Henry opened their home to 2 orphaned teenage boys for 3 and a half years. After her mother’s death, her teenage sister moved in with them. Katherine and Henry mourned their son Rudolph at birth. Katherine’s love of books was expressed in her first job at Christian Press and 19 years at Hull’s Family Bookstore, Winnipeg. She implemented Pioneer Girls at River East MB Church, Winnipeg, becoming the representative in southern Manitoba, then a member of the Canadian board. Katherine and Henry were deacons 20 years. Upon moving to Abbotsford, B.C., she served the Bakerview Church tape ministry, library, fellowship choir, and the Gideons women’s auxiliary. Her home, gardens, and cooking reflected her creativity. After Henry’s death, Katherine faced the challenges of dementia. Her faith in God was her hope and strength. At Menno Home, she was known for her beautiful smile and gentle spirit.