What's New
Through the conflict, life carries on in Ukraine
A FOCUS on Mission
Must Patience Be So Slow?
Harold Jantz: A Heart for the Mennonite Story
Lorlie Barkman: A Life of Creative Engagement
Last Days, First Days
Women in Ministry: Bertha Dyck
January Moment in Prayer “Holy Spirit—Fill Us!”
The Church as the Patient Body of Christ
Advent: Making Much of Jesus: Christmas Day
Home Katharina (Tina) Isaak 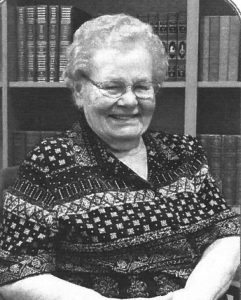 Tina’s family’s land was confiscated by the government. When Tina was 4, the family boarded cattle trains, arriving in Moscow with 16,000 other refugees. They were among the 6,900 allowed to leave. They lived in army barracks in Germany for a year until they were granted asylum in Paraguay. MCC paid for their 7-week voyage. They settled in the Chaco, and after 7 years moved to the more fertile Friesland. Tina had to leave school at 9 when her mother grew ill. Tina loved to read. At 16, she gave her heart to God and soon was baptized. The early years of Tina and Frank’s marriage were a time of poverty and civil war. Tina depended on God. She fed starving soldiers when her family had little to eat. She built an oven from an abandoned termite mound. She loved to tell her children stories, as they had no books. Tina often took in boarders to make ends meet. In 1960, the family of 6 immigrated to Canada, staying in Tina’s parents’ 2-bedroom basement suite for 2 years. Tina learned English and saved for a house by working as a housekeeper. Frank’s father moved in with them in 1964. They moved near Tina’s parents in 1967 to care for them as well. Tina enjoyed her garden. Frank and Tina travelled to Paraguay, Israel, Jordan, Europe, Hawaii and California. After Frank’s death, Tina determined to keep enjoying life. She played dominoes with children who visited. In February 2017, she contracted pneumonia.