What's New
Through the conflict, life carries on in Ukraine
A FOCUS on Mission
Must Patience Be So Slow?
Harold Jantz: A Heart for the Mennonite Story
Lorlie Barkman: A Life of Creative Engagement
Last Days, First Days
Women in Ministry: Bertha Dyck
January Moment in Prayer “Holy Spirit—Fill Us!”
The Church as the Patient Body of Christ
Advent: Making Much of Jesus: Christmas Day
Home Katharina Gross 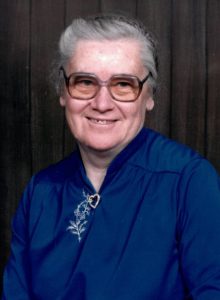 Katharina’s family immigrated to Paraguay in 1930. At 9, she chose to follow Jesus, and a few years later, she was baptized. She married Kornelius and together they welcomed 5 children and farmed as pioneers in Blumenthal, Paraguay. After her parents moved to Canada, Katharina and Kornelius followed in 1961, another difficult start. During their first years in Vancouver, she was often ill. Eventually, the family began to feel at home. The family was blessed to worship at Vancouver MB Church. Katharina often thanked God for his help and expressed her confidence with “I also believe that God will bring us into his eternal home.” Katharina and Kornelius moved into a condo in Abbotsford, B.C., in 1993. They worshipped and served at Clearbrook MB Church. After Kornelius’ sudden death in 1996, Katharina felt very alone. Regaining strength and energy, she travelled to the Middle East with her siblings and to Paraguay with her son Dave. After years of living alone grew too difficult and lonely, Katharina moved to Tabor Court, later to Bevan Lodge, and finally to MSA Manor. She wrote, “The Lord is gracious and provides me with my daily bread and health; to him be praise and honour.”