What's New
Through the conflict, life carries on in Ukraine
A FOCUS on Mission
Must Patience Be So Slow?
Harold Jantz: A Heart for the Mennonite Story
Lorlie Barkman: A Life of Creative Engagement
Last Days, First Days
Women in Ministry: Bertha Dyck
January Moment in Prayer “Holy Spirit—Fill Us!”
The Church as the Patient Body of Christ
Advent: Making Much of Jesus: Christmas Day
Home Justina (Jessie) Falk 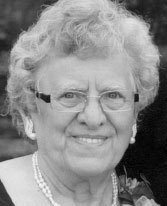 Jessie grew up in a Christian home near Lowe Farm, Man. At VBS, at 12, Jessie realized her need for a Saviour when she heard John 3:16. After Grade 8, she left school to help at home. Years later, she attended Winkler Bible Institute for 3 years, returned home and completed Grades 10 and 11. She moved to Winnipeg and worked at Pauline Chambers cookie factory. Jessie had an exceptional work ethic. She met Jake, whom she called her Prince Charming, at South End MB (now Portage Avenue) Church’s youth group. In 1965, MB Mission called them to India, but their visas were not approved. In 1967, they became the first part-time paid pastor couple at Manitou (Man.) MB. In 1973, Jake attended seminary in Fresno, Cal., where Jessie babysat and grew in her faith. Steinbach (Man.) MB Church called Jake as pastor in 1975. Jessie worked alongside Jake, offering visitation and hospitality and volunteering as church secretary. After Jake’s death, she married his brother Ben, but this marriage didn’t survive, and 6 years later, she was alone. She found comfort in Jeremiah 29:11. Jessie taught Sunday school, led Friendship Bible Coffee, served as usher, did visitation and went on 2 overseas mission trips. Nov. 20, 2013, Jessie was diagnosed with metastatic lung cancer. Jessie was passionate about her relationship with Jesus and communicating, in word and action, his love. “The Lord has been faithful to me, in all my weaknesses and imperfections,” she said. “He was there.”