What's New
Through the conflict, life carries on in Ukraine
A FOCUS on Mission
Must Patience Be So Slow?
Harold Jantz: A Heart for the Mennonite Story
Lorlie Barkman: A Life of Creative Engagement
Last Days, First Days
Women in Ministry: Bertha Dyck
January Moment in Prayer “Holy Spirit—Fill Us!”
The Church as the Patient Body of Christ
Advent: Making Much of Jesus: Christmas Day
Home John Wichert 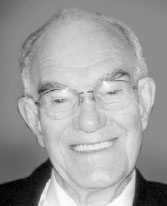 John’s family immigrated to Canada in 1926, arriving in Kitchener, Ont., and settling in the Niagara region, Ont. When John was 16, his father led him to Christ, and John was baptized. His uncle John was instrumental in his spiritual growth. John did well in his studies at Virgil (Ont.) Bible School. A conscientious objector, John was assigned to Chalk River Bush Camp in 1944, but was granted leave to return to Bright’s farm. John met Grace at Virgil MB Church. John was a machinist for General Motors for 31 years. Early retirement at 57 allowed him time to picnic and bike with his grandchildren. A rich bass, John loved singing in men’s choir and playing mandolin. He taught Sunday school to children, youth and adults. He saw the role of deacon as a high calling; he cared for widows side-by-side with Grace: hanging pictures, fixing taps and offering rides. John served humbly and faithfully – always ready to pray. When his memory deteriorated, John moved to Tabor Manor, where he continued to enjoy music, spontaneous prayer and nightly devotions with Grace.