What's New
Through the conflict, life carries on in Ukraine
A FOCUS on Mission
Must Patience Be So Slow?
Harold Jantz: A Heart for the Mennonite Story
Lorlie Barkman: A Life of Creative Engagement
Last Days, First Days
Women in Ministry: Bertha Dyck
January Moment in Prayer “Holy Spirit—Fill Us!”
The Church as the Patient Body of Christ
Advent: Making Much of Jesus: Christmas Day
Home John Wall 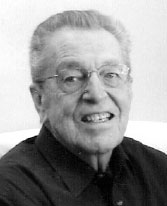 John’s family immigrated to Canada in 1926, settling in Namaka, Alta. In 1938, they moved to Vineland, Ont. John’s conversion in 1945 gave his life direction. After Winkler (Man.) Bible Institute, John graduated from MB Bible College, Winnipeg, and later, from Tabor College, Hillsboro, Kan. He also spent a year at MB Seminary, Fresno, Cal. After a one-day honeymoon in Niagara Falls, Ont., John and Frieda drove to B.C., where John took his first teaching position at Chilliwack Bible School. John was greatly appreciated as a Bible teacher and for his caring and pastoral spirit. John was the first pastor of Fort Garry MB Church, Winnipeg, serving for 10 years. In 1973, he accepted an assignment with the MB Board of Missions in Asunción, Paraguay, where he pastored the German-speaking MB church and taught in the Spanish Bible Institute. In 1977, John began working for the MB Missions and Services office, Hillsboro, Kan., which took him across Canada, U.S.A, Peru, Panama, Pakistan and Afghanistan. His family knew they were sharing him with many people, and John enjoyed his work. In 1985, John and Frieda accepted a call to pastor Kitchener MB Church. With Frieda’s death, he lost his partner in ministry. Two years later, John regained his spirit to create this personal mission statement: be available. Even on the day of his disabling stroke in 2007, he was preparing a sermon. John and Frieda’s headstone declares “There is joy in serving Jesus.”