What's New
A FOCUS on Mission
Must Patience Be So Slow?
Harold Jantz: A Heart for the Mennonite Story
Lorlie Barkman: A Life of Creative Engagement
Last Days, First Days
Women in Ministry: Bertha Dyck
January Moment in Prayer “Holy Spirit—Fill Us!”
The Church as the Patient Body of Christ
Advent: Making Much of Jesus: Christmas Day
Advent: Making Much of Jesus: Fourth Advent
Home John Niebuhr Klassen 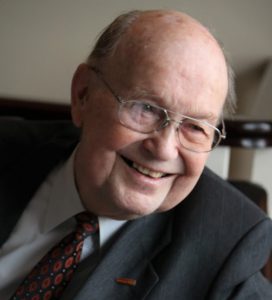 When John heard his diagnosis of terminal cancer in June 2020, one of the first things he said was: I always wanted Mary to go first so that I could be with her to the end. To those who knew him, that reaction was very much in character – his love for his wife of 67 years was strong and enduring, and evident to all.

They met in Germany after the war, having both fled their home in the Ukraine with their mothers and siblings. Both their fathers had been arrested by the Soviets. John only learned decades later that his father had been executed ten days after his arrest.

Both families emigrated to Canada where John lost no time in catching up with his frequently interrupted basic education and embarked on a life-long continuing education journey, starting with Bible school in Winkler where his family had settled. In 1953 John joined Mary in Vancouver where they married and started their family – John Jr. was born in 1954, Ruth in 1956. Timothy joined them eight years later.

Post-war Germany was not only significant in terms of meeting his future wife. It was also where John found Jesus as his Saviour; or, as he liked to say, Jesus found him. As his diaries of the time show, his love of the Bible and his commitment to serving the Lord emerged early on in his Christian journey. In 1957 he moved his young family to Winnipeg to attend MB Bible College. Over the years, stints at MB Biblical Seminary in Fresno, Fresno Pacific University and Fuller Theological Seminary in Pasadena followed. Numerous degrees culminated in a PhD from the University of South Africa at the age of 74.

It was not only John’s thirst for knowledge that motivated his academic endeavours, but his desire to be better equipped to follow his calling as missionary, church builder and teacher. For 50 years John and Mary served with MB Missions in Germany pastoring churches, teaching in various bible schools and other institutions and giving leadership in a variety of roles within the MB community in Germany, Austria and Switzerland.

When an influx of Mennonites from the Soviet Union arrived in Germany in the 1970s and 80s the focus of John and Mary’s work shifted to serving and supporting these ‘Aussiedler’ in the often difficult process of integration into a new culture, both socially and spiritually. John was known and respected as a builder of bridges between people and churches with different perspectives and practices. He was instrumental in creating the Bibelseminar Bonn in 1991 with and for the Aussiedler communities and taught here until the end of their time in Germany.

Throughout his life John was a researcher and writer – of diaries, sermons, articles and books. Through his literary legacy he will continue to contribute to the work he loved for years to come.

John and Mary moved to Abbotsford in 2008, some 15 years after their official retirement. Even from afar and to the end John continued to be actively involved in the ministry in Germany to which he had dedicated his life. He passed away peacefully with his family by his side.