What's New
A FOCUS on Mission
Must Patience Be So Slow?
Harold Jantz: A Heart for the Mennonite Story
Lorlie Barkman: A Life of Creative Engagement
Last Days, First Days
Women in Ministry: Bertha Dyck
January Moment in Prayer “Holy Spirit—Fill Us!”
The Church as the Patient Body of Christ
Advent: Making Much of Jesus: Christmas Day
Advent: Making Much of Jesus: Fourth Advent
Home John Henry Peters 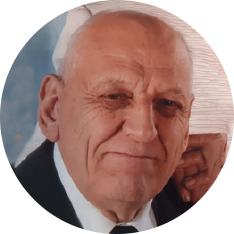 When John was 2, a specialist in Edmonton determined prenatal injuries affecting his right side were irreversible. They caused hardship, but also produced a determined, prayerful man who placed his hope in God. His parents bought him a piano and lessons; despite difficulties with his right hand, his aptitude was evident. On hour-long horseback rides to school, he and his sister Margaret amused themselves by singing in harmony. John experienced learning difficulties; through persistence and his Aunt Justina’s patient coaching, he grew in reading and math. In 1946, the family moved to Matsqui, B.C. As a teen, John asked his brother how to follow Christ and they prayed together. In 1957, the family moved to a smaller farm in Yarrow, B.C., where John shared in the milking duties. He enjoyed driving tractor. John’s parents helped him build a home in 1977. He was married to Margaret for 21 years. After a year and a half of widowhood, he married Erna, becoming a stepfather. John loved Bible reading and his prayer times with Erna. He joined choirs, including the Abbotsford Male Choir. In a matter of days, John lost Erna, his home, car, and church family. Despite this, he remained grateful to God. John moved to a care home in Delta, B.C., where he regularly encouraged and prayed with his grieving stepson Randy. In 2018, John transferred to MSA Manor, Abbotsford, B.C., near his sister and church. After a fall, he succumbed to complications. John shared the Apostle Paul’s desire for all to trust in Christ.