What's New
A FOCUS on Mission
Must Patience Be So Slow?
Harold Jantz: A Heart for the Mennonite Story
Lorlie Barkman: A Life of Creative Engagement
Last Days, First Days
Women in Ministry: Bertha Dyck
January Moment in Prayer “Holy Spirit—Fill Us!”
The Church as the Patient Body of Christ
Advent: Making Much of Jesus: Christmas Day
Advent: Making Much of Jesus: Fourth Advent
Home John (Hans) Peters 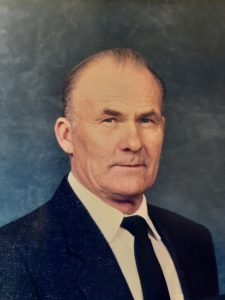 John was the fifth of seven siblings growing up in a loving Christian home. At 19, he became a Christian through the preaching of missionary Toews. That November, John was baptized. When the family moved in 1951 to Bagé in Rio Grande do Sul, he met his future wife Kaetie Braun. Their love spanned 65 years together. They immigrated to Canada in 1967, finding a home in Vancouver. John and Kaetie worshipped at Vancouver MB Church. When Culloden MB Church began, they became deeply involved. Their son Dieter was born in 1957 in Brazil, and Albert, in 1968 in Canada. Dieter died in a car accident in 1977. This devastated them. Albert and Lore adopted two boys, for whom John and Kaetie were so grateful. John worked in construction for others, then formed his own company in 1992. At 57, John had a kidney attack on vacation in Hawaii. He began chemotherapy for kidney cancer, and in April 1994, had a kidney removed. As a result of the cancer, John had to terminate his company – his passion and joy. John then assisted his wife with light duty day work. He did most of the driving. They enjoyed working together. He also worked many years with Albert, milling wood. In 1998, John and Kaetie moved to Abbotsford and joined Clearbrook MB Church, where they volunteered joyfully on the food service committee. John was also part of the luncheon service at Garden Park Tower. When his health deteriorated, he moved to Mayfair Senior Living and Care Home. He was the last of his siblings (Gerhard, Mariechen, Liese, Leni, Jacob, Else). John was a hard worker who cared for everyone around him. He enjoyed good food with family and friends. He had a good sense of humour and liked to joke around.