What's New
Through the conflict, life carries on in Ukraine
A FOCUS on Mission
Must Patience Be So Slow?
Harold Jantz: A Heart for the Mennonite Story
Lorlie Barkman: A Life of Creative Engagement
Last Days, First Days
Women in Ministry: Bertha Dyck
January Moment in Prayer “Holy Spirit—Fill Us!”
The Church as the Patient Body of Christ
Advent: Making Much of Jesus: Christmas Day
Home John Goossen 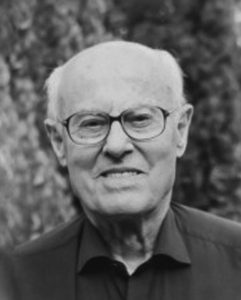 John (born Yvan) devoted himself to his Christian faith, which permeated every facet of his life. When John was 12, Chinese and Russian officials arrested his father; the family didn’t know his status until he returned 2 years later. As a teen, John had to dig graves for both his sisters. He was forever grateful to MCC for bringing his and Irene’s families from China to Canada in 1948. He cherished the freedom and security Canada offered him after his youth under the oppression of Communism. After retiring from millwork at 63, his second occupation was with MCC, where he worked until his final months – his way of saying thank you. John drew great pleasure from woodworking, playing the mandolin, camping, mountain climbing, hang gliding and working on cars. He enjoyed an active, healthy life until the last month, during which he drew his family close and received much comfort from his many friends.