What's New
Through the conflict, life carries on in Ukraine
A FOCUS on Mission
Must Patience Be So Slow?
Harold Jantz: A Heart for the Mennonite Story
Lorlie Barkman: A Life of Creative Engagement
Last Days, First Days
Women in Ministry: Bertha Dyck
January Moment in Prayer “Holy Spirit—Fill Us!”
The Church as the Patient Body of Christ
Advent: Making Much of Jesus: Christmas Day
Home John Abe Koop 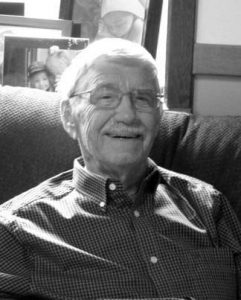 John’s family immigrated to Manitoba, Canada, when he was 6 months, and moved to Ontario when he was 13. At 16, he began full-time employment at E.D. Smith’s nursery. He studied carpentry in Alberta. Beginning in 1969, John taught woodworking at Kernahan Park Secondary School, St. Catharines, Ont., until 1986. After retiring, he continued woodworking. John was a trustee and usher at Vineland M.B. Church and a trustee at Black Creek MB Church. In 1989, John and Lily moved to B.C., where he became an avid fisherman. He enjoyed his weekly coffee buddies and seniors’ groups from the church. He took care of Lily until her death, learning to mend clothes and quilt after her eyesight failed. John also mourned a granddaughter. In later years, John reconnected with Eleanor Wolverton and had many good times together.