What's New
A FOCUS on Mission
Must Patience Be So Slow?
Harold Jantz: A Heart for the Mennonite Story
Lorlie Barkman: A Life of Creative Engagement
Last Days, First Days
Women in Ministry: Bertha Dyck
January Moment in Prayer “Holy Spirit—Fill Us!”
The Church as the Patient Body of Christ
Advent: Making Much of Jesus: Christmas Day
Advent: Making Much of Jesus: Fourth Advent
Home John A. Wiebe 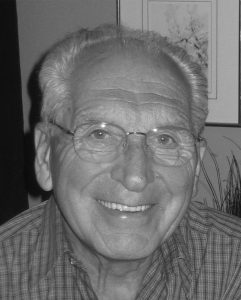 John grew up with Sunday school and family devotions. He accepted Jesus as Saviour at an evangelistic meeting Dec. 3, 1939. His father’s health deteriorated after the family’s move to Tofield, Alta., in 1944. On his final trip to the hospital, his father asked John to take care of his mother and 5 siblings. John took charge of the farm, and God provided neighbours to help at harvest. In 1947, the family sold the farm, paid their medical debts and moved to B.C., where they picked berries and hops. In the 1948 flood, their Greendale home stood in 12 feet of water. Through the government and Red Cross, the house was restored and the family received food for a year. Working with the youth at Greendale MB Church, John met Martha. When John prayed for work in 1955, he was offered a position as parts man at Fortin’s, where he stayed 37 years. At Broadway MB Church, John and Martha served as deacons, elders, ushers, choir members and Sunday school leaders. John loved his family deeply and told them often. He believed in the power of prayer, praying for them daily by name. John and Martha moved to Abbotsford in 2003 to be close to family. As his health deteriorated, John moved to Tabor Manor with Martha and then to Tabor Home for his last 3 years. Hebrews 13:8 was dear to him.