What's New
A FOCUS on Mission
Must Patience Be So Slow?
Harold Jantz: A Heart for the Mennonite Story
Lorlie Barkman: A Life of Creative Engagement
Last Days, First Days
Women in Ministry: Bertha Dyck
January Moment in Prayer “Holy Spirit—Fill Us!”
The Church as the Patient Body of Christ
Advent: Making Much of Jesus: Christmas Day
Advent: Making Much of Jesus: Fourth Advent
Home Jacob Toews 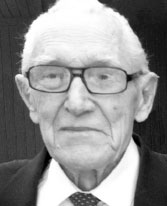 Jacob’s family immigrated to Canada in 1924, settling on a farm in Arnaud, Man. Jacob began his teaching career in 1935. During WWII, Jacob was a CO teacher on United Church mission stations on Lake Winnipeg. After the war, he taught at MB Collegiate Institute, Winnipeg. In 1955, Jacob was called to Mennonite Educational Institute, Abbotsford, B.C., where he taught English and directed plays. After his 1979 retirement, he continued in his love by teaching English to new Canadians, helping many get their driver’s license. He joined the Golden Strings and played in retirement homes. Jacob was also a member of the Fraser Valley Symphony for 16 years.