What's New
Through the conflict, life carries on in Ukraine
A FOCUS on Mission
Must Patience Be So Slow?
Harold Jantz: A Heart for the Mennonite Story
Lorlie Barkman: A Life of Creative Engagement
Last Days, First Days
Women in Ministry: Bertha Dyck
January Moment in Prayer “Holy Spirit—Fill Us!”
The Church as the Patient Body of Christ
Advent: Making Much of Jesus: Christmas Day
Home Jacob Heinrichs 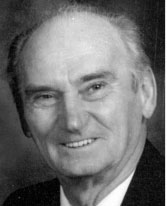 Jake’s family settled near Brookdale, Man., where he grew up working on the farm and developed a love of machinery. Jake accepted Jesus as Saviour in his youth. In 1948, Jake and his mother moved to Ontario. After Jake married Lydia, they established their own farm. Jake loved boating, water skiing, baseball and hockey. He had a strong, quiet faith and led his family by example. Shortly after moving in 1994, Lydia had a debilitating stroke and Jake became her caregiver. In 2005, they lost their daughter Marilyn to a house fire. A year after Lydia’s death, Jake married Hilda and they enjoyed 5 years of companionship.