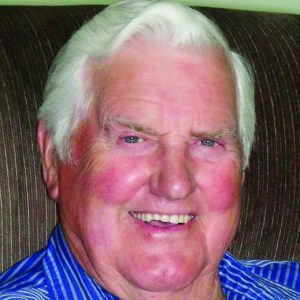 Jake walked or rode horse 4 miles to school. His favourite pastimes were hunting, trapping, and fishing. At 7, he contracted scarlet fever, which scarred his eardrums, resulting in partial hearing loss. His older sister Margaret fell ill after a day of stooking grain together; she died a week later at 19. In 1946, the family moved by train to Arnold, B.C., where they raised livestock and grew raspberries. Jake attended a year at South Abbotsford Bible School. At church, he met his sweetheart Kit. To raise funds for their life together, he ran an elevator grader in Grande Prairie, Alta., until 3 weeks before their wedding. Jake and Kit were charter members of South Peace Centennial Museum. They enjoyed retirement: camping, gardening, picking berries, visiting relatives, spending summer days in Yukon and Alaska, winters in Arizona. Jake loved entertaining. Drinking coffee and watching hockey were his “favourite indoor sports.” He took every opportunity to be with his children, grandchildren, and great-grandchildren. When Kit entered care for Alzheimer’s disease, he visited and fed her every day until her death. After a stroke in January 2018, Jake used a walker and gave up his licence. In February 2019, he was admitted to Beaverlodge Hospital, where he reported looking forward to waking up each day. Jake always looked at the sunny side; he’d laugh until tears ran down his face. Toward the end, he spoke with longing of his coming reunion with Kit and his enduring wish for all to experience the assurance of salvation he enjoyed.