What's New
Through the conflict, life carries on in Ukraine
A FOCUS on Mission
Must Patience Be So Slow?
Harold Jantz: A Heart for the Mennonite Story
Lorlie Barkman: A Life of Creative Engagement
Last Days, First Days
Women in Ministry: Bertha Dyck
January Moment in Prayer “Holy Spirit—Fill Us!”
The Church as the Patient Body of Christ
Advent: Making Much of Jesus: Christmas Day
Home Hilda Susanna Heidebrecht 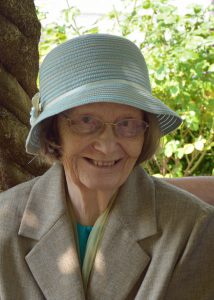 At 10, Hilda trusted in Jesus as Saviour, and her faith remained strong her entire life. She attended Coaldale School to Grade 9, but stayed home for a year after Grade 8 to help her mom with her baby sister. She attended Coaldale Bible School (1947–50). After completing Grade 12 in 1956, Hilda earned a teacher training certificate from University of Calgary. She taught 2 years in Lethbridge and 1 in St. Paul, Alta. Hilda and John had a 2-month honeymoon through 9 European countries. They lived in Bruce, Alta.; Virgil, Ont.; Niagara Falls, Ont.; Wainwright, Alta.; and Medicine Hat, Alta. Hilda taught Sunday school, served with Pioneer Girls and led Christian Women’s Club. After John retired from teaching in 1983, they moved to Abbotsford, B.C. Hosting Japanese students opened doors for Hilda to provide English tutoring for many Korean newcomers to Canada. Hilda and John returned many times to Europe. In 2001, on a Disciple Making International trip, Hilda visited her grandfather’s estate in Neu Samara. Hilda’s servant heart was most evident with her own family. She put others first and readily gave of her time and what she had. She was always open to looking after her grandchildren. She devoted considerable time for prayer: because she found her strength in the Lord, she knew God would meet the needs of others. Hilda increasingly assumed the role of caregiver for John. After John entered a care home, her own health deteriorated rapidly. She developed intercranial bleeding and died on their 56th wedding anniversary.