What's New
How sweet the sound
One MCC Thrift Store Began With a Few...
A Hunger for Conversation
Getting the mental and emotional rest you need...
The Patience of God
2023 Spirit of MDS Fund accepting grant applications
October 2022 update from the CCMBC Executive Board
Arnold Community Church hosts block party to thank...
When Spring returns
An autumn reset
Home Hilda Shevkenek Neudorf 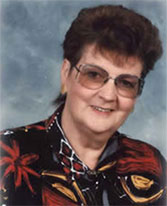 Hilda attended Bear Canyon and Cherry Point schools, obtaining her Grade 12 equivalency. Hilda was working for Steve Shevkenek in his grocery store when she met his brother, Metro and the romance blossomed. She loved to cook and sew for her family. Fulfilling the role of wife and mother was interrupted in 1972 when Metro had a stroke, and Hilda became provider as well as caregiver. This made her an independent, strong-willed woman. She worked in stores, at Chetwynd Hotel, and at hospitals in Chetwynd and Fort St. John until her retirement in 1999. Hilda remained involved in home care, palliative care, and housekeeping. Hilda was a woman of faith. In 2006, this widow welcomed the opportunity to extend her family by marrying John Neudorf. She moved out to the farm, something she’d always wanted to do. She bravely battled cancer for the next 6 years.