What's New
A FOCUS on Mission
Must Patience Be So Slow?
Harold Jantz: A Heart for the Mennonite Story
Lorlie Barkman: A Life of Creative Engagement
Last Days, First Days
Women in Ministry: Bertha Dyck
January Moment in Prayer “Holy Spirit—Fill Us!”
The Church as the Patient Body of Christ
Advent: Making Much of Jesus: Christmas Day
Advent: Making Much of Jesus: Fourth Advent
Home Hilda Mierau 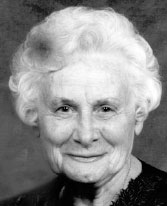 Hilda’s childhood was spent in various towns in Ukraine as her father managed several mills. Her father was taken in 1938 by the secret police and never seen again. To support the family, Hilda became a teacher and translator until she fled to Germany with her mother and brother during WWII. The family immigrated to Canada in 1948 with the help of Froese relatives, eventually settling in Winnipeg. Hilda worked at MB Bible College, and through evening classes with A.H. Unruh and H.H. Janzen, she understood salvation. She married Peter, a widower, whose daughter Irene was still in Russia. Through prayer and hard work, in 1963, Peter, Hilda and 6-year-old Ursula welcomed Irene to Canada. Peter and Hilda served Winnipeg Central MB (now Elmwood) Church as deacons. They entertained many at their Laclu, Ont., cottage. Hilda’s her eyesight deteriorated in later years. Family was always important. She loved being Oma and Omi to her grandchildren and great-grandchildren.