What's New
Through the conflict, life carries on in Ukraine
A FOCUS on Mission
Must Patience Be So Slow?
Harold Jantz: A Heart for the Mennonite Story
Lorlie Barkman: A Life of Creative Engagement
Last Days, First Days
Women in Ministry: Bertha Dyck
January Moment in Prayer “Holy Spirit—Fill Us!”
The Church as the Patient Body of Christ
Advent: Making Much of Jesus: Christmas Day
Home Hilda Krahn 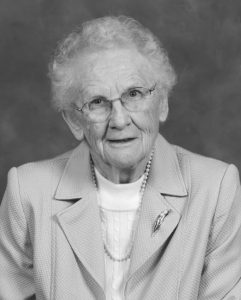 Hilda’s family fled unrest in 1935, settling in the Caucasus. A former neighbour convinced her father to return to Nikolayevka to retrieve furniture. Her father was captured and sent to Siberia. Her mother Anna tried to provide, but they lived in need. Anna’s sister Lena Holzrichter, a prison camp survivor who had lost her only child, offered to take one of Anna’s to her home. With the hope that a change of climate would improve the 14-year-old’s health, Hilda was chosen. She never saw her mother again. When war broke out, Hilda and her aunt fled to Molotschna, Ukraine. Hilda’s uncle Jakob Peters arranged for them to immigrate to Gronau, Germany, in 1943. Here Hilda accepted Jesus as Saviour, and her uncle baptized her. In 1948, Hilda and Lena immigrated to Kitchener, Ont., where Hilda met and married William. They moved to Greendale, B.C., in 1963. After flooding, they found higher ground in Clearbrook, B.C. At Clearbrook MB Church, Hilda and William served the catering committee. When their garden became too much, they moved to a condo by the church. Hilda visited her brother Johann in Germany and arranged for both her brothers to visit her in Canada – after 49 years apart. Feisty and energetic, Hilda could dish up a fantastic meal from simple ingredients and sew fancy dresses for her daughters’ weddings. She reacted to her Parkinson’s disease diagnosis at 80 with denial. When she could no longer manage, daughter Anni moved in with her, so she could stay in her home. When Hilda could no longer speak, her eyes still sparkled for her family. Her dependence on God gave her strength.