What's New
Through the conflict, life carries on in Ukraine
A FOCUS on Mission
Must Patience Be So Slow?
Harold Jantz: A Heart for the Mennonite Story
Lorlie Barkman: A Life of Creative Engagement
Last Days, First Days
Women in Ministry: Bertha Dyck
January Moment in Prayer “Holy Spirit—Fill Us!”
The Church as the Patient Body of Christ
Advent: Making Much of Jesus: Christmas Day
Home Hilda Foth 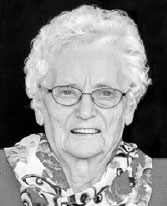 Hilda accepted Christ as Saviour at an early age and at 13 recommitted herself. She enjoyed singing in the church choir in her teens. She attended Bethany Bible Institute, Hepburn, Sask. Hilda moved to Saskatoon at 20 to work in housekeeping. Hilda and Henry began married life on his farm near Hague, Sask. After 4 years, hailed-out crops forced a move to Saskatoon. Hilda looked after their growing family. For 9 years, they returned to the farm on weekends to work the fields and garden, “camping” in a farmhouse with no telephone, electricity, running water or sewer. In 1966, the family moved back to the farm, and in time, modernized the house. Hilda worked hard cooking, baking, cleaning, gardening. She devoted herself to Betty and Daniel, whose disabilities required continuous care. Hilda and Henry retired to Waldheim, Sask., where Hilda enjoyed her smaller garden. She learned to enjoy fishing and camping with Henry through Alaska, Yukon and the Northwest Territories. Visiting Germany was a highlight. Hilda and Henry moved to a condo in Saskatoon, then to Bethany Manor where Hilda enjoyed singing in the choir. In early 2012, Hilda had a stroke, which left her partially paralyzed, requiring a move into the Rosthern (Sask.) Mennonite Nursing Home, where she liked interacting with staff.