What's New
Abortion, the image of God, and faithful witness...
Choosing motherhood: The sacrifice of honouring life
MWC Assembly small but full of joy
Bad back doesn’t hold back MDS volunteer
Transition in CCMBC National Faith and Life Leadership
Leading through the trauma of covid: Part three...
The church distracted: When the main thing is...
Remote wilderness rescue turns into service with MDS...
How open is your mind?
Following Jesus together across barriers
Home Hertha Doerksen 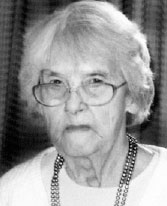 Hertha’s family immigrated to Canada in 1926, settling first in Manitoba, then in Munson, Alta. Hertha accepted Christ in 1936. She attended 2 years at Gem (Alta.) Bible School (where she met Jake) and 1 year at Prairie Bible School, Three Hills, Alta. After Hertha and Jake married, he was sent overseas for 2 years, and Hertha moved back to her parents’ home, where her first son was born. When Jake returned, they bought his family’s farm in Gem. Through the difficult times, Hertha experienced God’s faithfulness. In 1959, the family moved to Chilliwack, B.C., to run a dairy farm. Hertha loved to garden, clean, and bake. She mourned her son Robert and a granddaughter. Hertha and Jake enjoyed travelling. Her last 15 years were at Menno Home. Hertha never complained, but with gentleness, gave everything she had to her family.