What's New
Through the conflict, life carries on in Ukraine
A FOCUS on Mission
Must Patience Be So Slow?
Harold Jantz: A Heart for the Mennonite Story
Lorlie Barkman: A Life of Creative Engagement
Last Days, First Days
Women in Ministry: Bertha Dyck
January Moment in Prayer “Holy Spirit—Fill Us!”
The Church as the Patient Body of Christ
Advent: Making Much of Jesus: Christmas Day
Home Herman Henry Heinrichs 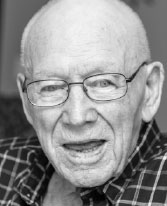 Herman’s mother died of TB, and in 1916, his father married Anna Dyck. His father was murdered in 1919, and his second mother died of typhus as they sought to escape. Unable to care for all his siblings, Herman’s brother Cornelius and their grandmother found them homes. They placed Herman with Peter Jacob Martens of Nicolaipol, Russia, who settled in Turnhill, Sask., in 1924. Herman accepted the Lord as Saviour at 16 and was baptized at 28. Herman and Susie farmed near Herbert Sask., 1944–1954, then bought a farm near Niverville, Man. Herman’s widowed brother Julius and his 4 children joined the family. Herman and Susie retired to Niverville in 1976, leaving son Edwin the farm. They travelled across the U.S. and Canada, and to Kenya, Egypt, and Germany, visiting their children, and Herman took up woodworking. In 1997, Herman and Susie moved in with Marilyn in Winnipeg.