What's New
Through the conflict, life carries on in Ukraine
A FOCUS on Mission
Must Patience Be So Slow?
Harold Jantz: A Heart for the Mennonite Story
Lorlie Barkman: A Life of Creative Engagement
Last Days, First Days
Women in Ministry: Bertha Dyck
January Moment in Prayer “Holy Spirit—Fill Us!”
The Church as the Patient Body of Christ
Advent: Making Much of Jesus: Christmas Day
Home Henry Wiebe 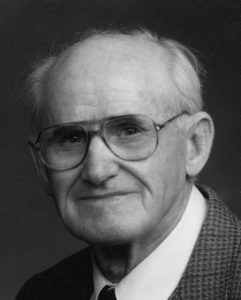 Henry’s family immigrated to Canada in 1925, settling in Gnadental, Man., then the La Riviere area, where Henry travelled to school by horse and wagon. He enjoyed popular music, evidenced by his Bluebird jazz record collection. Henry had a spiritual awakening through the ministry of Herman Lenzmann. Henry’s studies at Winkler (Man.) Bible Institute were interrupted by a call to service during WWII. He served his country by delivering coal in Winnipeg and working as lumberjack in Kapuskasing, Ont. He started his own farm near La Riviere. Winters, he helped his sister, a widow with 5 children. He earned his electrician’s licence by correspondence. He brought electricity to many homes and enjoyed visiting with the people he met, including his future wife. Henry was among the first to become a registered seed grower and producer of the new crop canola. He helped construct Manitou MB Church. Henry valued education for his children and grandchildren. In retirement, he pursued golfing, reading and photography. He will be remembered for his generosity, helpfulness, dependability and interest in Mennonite history.