What's New
A FOCUS on Mission
Must Patience Be So Slow?
Harold Jantz: A Heart for the Mennonite Story
Lorlie Barkman: A Life of Creative Engagement
Last Days, First Days
Women in Ministry: Bertha Dyck
January Moment in Prayer “Holy Spirit—Fill Us!”
The Church as the Patient Body of Christ
Advent: Making Much of Jesus: Christmas Day
Advent: Making Much of Jesus: Fourth Advent
Home Henry Unruh 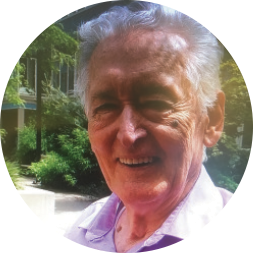 Henry attended school until age 6 and helped his father make sausage at a butcher shop. At 7, Henry lost his mother. His father remarried, but their home was not peaceful. Henry decided to follow Jesus at 10, was baptized at 16, and attended a year of Bible school. He worked in a bus manufacturing plant in Uruguay and Argentina. Upon returning to Paraguay, his relationship with Mary sparked into courtship. They married in 1963 and immigrated to Canada. He worked as a framer in Vancouver and as a subcontractor installing countertops and backsplashes in Abbotsford, B.C. The family tried farming in Paraguay 1972–74, but Mary missed modern amenities. Back in Canada, Henry worked for his brother-in-law at Columbia Kitchen Cabinets for 21 years. He took his family to Oliver and Osoyoos, B.C. Mary died in a car accident on the way to their youngest child’s wedding in Manitoba. Henry was left with lifelong debilitating leg injuries and retired on disability. He went to Paraguay in 1993 and he returned with his new bride Hedwig to start his second chapter. Henry enjoyed gardening, fishing, mission trips, visiting children and grandchildren in Manitoba, and reading God’s Word. He lived with Hedwig until December 2018, when his physical disabilities forced a move to Tabor Home, Abbotsford. Mini-strokes affected his communication. Until his final week, Henry and Hedwig recited the Lord’s Prayer and Psalms 23 and 121 together. Henry was a kind, gentle, selfless husband and father.