What's New
A FOCUS on Mission
Must Patience Be So Slow?
Harold Jantz: A Heart for the Mennonite Story
Lorlie Barkman: A Life of Creative Engagement
Last Days, First Days
Women in Ministry: Bertha Dyck
January Moment in Prayer “Holy Spirit—Fill Us!”
The Church as the Patient Body of Christ
Advent: Making Much of Jesus: Christmas Day
Advent: Making Much of Jesus: Fourth Advent
Home Henry Jacob Pauls 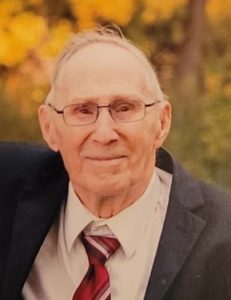 When Henry was 7, his family left the Soviet Union on the last train, staying in Germany 6 months. In June 1930, they came to Manitou, Man. Henry’s schooling was interrupted by frequent moves. He attended Archibald School and Hazel School. In 1935, he did not attend school because the van driven by a team of horses was full. The next year, the family rented a farm southeast of Purves, Man., where Henry went to Willowdale School for Grade 6 and part of 7. Sadly, it grew to difficult to feed the horse and travel in the cold winter. Between the farming operations, he attended Winkler Bible Institute, where he gained a thirst for theology. Henry’s parents were members of Manitou MB Church but couldn’t often travel there. When a preacher came to their home and gave the invitation to receive Christ, Henry did. He had many doubts, but Psalms 73:23 confirmed his faith. Henry married Helen Janzen and they raised five children on a farm near Purves. Henry loved taking pictures. At 80, Henry retired from farming and in 2006, Henry and Helen moved into Morden, Man. At Oak West Estates, Henry enjoyed shuffleboard, puzzles, board games, and chess. He was a fan of the Blue Jays, Winnipeg Jets, and curling. He enjoyed reading and studying most of all. It was discouraging when his hearing and eyesight deteriorated, but for Henry there was always hope (Psalm 132:9). Henry suffered at least two small heart attacks, which didn’t stop him too much, but in December 2020, a serious stroke changed his life. After a time at Boundary Trails Health Centre, he and Helen settled into a care home in St. Claude, then into Tabor Home. It seemed Henry was improving, but his heart was giving out. His family enjoyed many great visits. He continued to be hospitable, kind, loving, and patient, watching out for Helen first. His spirit was alive as he communicated his love for his children and grandchildren both in person and on the screen.