What's New
A FOCUS on Mission
Must Patience Be So Slow?
Harold Jantz: A Heart for the Mennonite Story
Lorlie Barkman: A Life of Creative Engagement
Last Days, First Days
Women in Ministry: Bertha Dyck
January Moment in Prayer “Holy Spirit—Fill Us!”
The Church as the Patient Body of Christ
Advent: Making Much of Jesus: Christmas Day
Advent: Making Much of Jesus: Fourth Advent
Home Henry H. Dueck 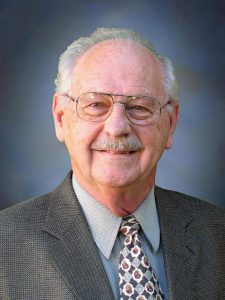 When Henry was 6, his family moved to Ontario, where they farmed fruit. He accepted Jesus as Saviour following a sermon by H.H. Janzen on Revelation 3:19–20. Henry was passionate about education; he persevered in his goals to finish high school and university, earning a BSc from University of Manitoba. He married his high-school sweetheart, Mary, whom he met at Mennonite Collegiate Institute, Gretna, Man. They spent the first year of married life in Germany, where Henry had earned a university scholarship, then another year teaching in England. They continued these shared passions of travel and learning for 60 years, teaching in Ontario and California before retiring in Abbotsford. Henry was a board member for MB Bible College, Winnipeg (now CMU) and the MB Board of Higher Education before becoming vice president of MB Biblical Seminary, Fresno, Cal., 1977–85. Henry and Mary taught English in China and Russia. From 1994–2006, Henry chaired the board of St. Petersburg Christian University in Russia, which awarded him an honorary doctorate in 2006. To his children, he was an example of perseverance and dedication to Christian service.