What's New
Through the conflict, life carries on in Ukraine
A FOCUS on Mission
Must Patience Be So Slow?
Harold Jantz: A Heart for the Mennonite Story
Lorlie Barkman: A Life of Creative Engagement
Last Days, First Days
Women in Ministry: Bertha Dyck
January Moment in Prayer “Holy Spirit—Fill Us!”
The Church as the Patient Body of Christ
Advent: Making Much of Jesus: Christmas Day
Home Henry Abrahams 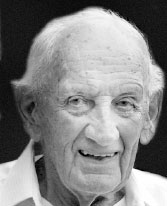 When Henry was 2, his family immigrated to Canada, settling in Leamington, Ont. After they moved to Vineland, Ont., Henry worked at the basket factory in Beamsville, Ont. He gave his heart to God at a young age, and church remained important to him. Henry had many stories of his time as a conscientious objector at a lumber camp in northern Ontario. With a passion for music, he moved to Toronto to study at the Royal Conservatory of Music. He loved to recount his experiences in Toronto as a hospital elevator operator and a chocolate factory worker. When Henry returned to Vineland, he met Eva and they married. Until his retirement in 1988, he served General Motors 40 years. He worked hard to support 7 children, taking a second job as a roofer with his brother. He taught many young men, including his sons, roofing skills. Henry sang tenor in the church choir and Niagara Male Chorus. After retiring, he enjoyed biking, swimming, gardening and bowling with friends. Henry loved his children equally and unconditionally. His favourite verse was James 1:12. A quiet, compassionate man with a sense of humour, even in long-term care, he sustained a thankful heart.