What's New
A FOCUS on Mission
Must Patience Be So Slow?
Harold Jantz: A Heart for the Mennonite Story
Lorlie Barkman: A Life of Creative Engagement
Last Days, First Days
Women in Ministry: Bertha Dyck
January Moment in Prayer “Holy Spirit—Fill Us!”
The Church as the Patient Body of Christ
Advent: Making Much of Jesus: Christmas Day
Advent: Making Much of Jesus: Fourth Advent
Home Helene Neufeld 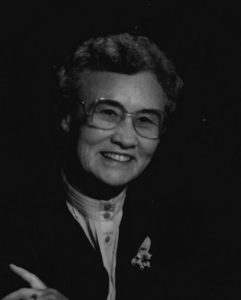 When she was 4, Helene’s family immigrated to Canada, settling in Niverville, Man. At Carmichael Elementary, she learned to memorize Scripture. She earned a week at a Canadian Sunday School Mission camp by memorizing part of John, which she remembered all her life. One day when the snowflakes filled the air, Helene was convicted that her own heart needed to be covered and cleansed by the blood of Jesus. Her parents led her to the Lord. Isaiah 1:18 gave her assurance. After 2 years at Winkler (Man.) Bible Institute, Helene felt called to serve with MCC in Washington, D.C., in an orphanage. She also served in Bethesda Home under MCC. After working in Winnipeg for several years, she finished her high school education at Sure Pass, B.C. She joined the family in Ontario and enrolled in the Hamilton School of Nursing. After graduating with her R.N. degree, she worked in St. Catharines, Ont. She finished her career as a public health nurse. She enjoyed teaching Sunday school and vacation Bible school. Her interest in reading led her to be church librarian. Helene prayed for her nieces and nephews, who became as precious to her as if they were her own children.