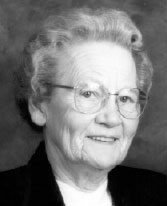 Helen asked Jesus into her heart at a revival meeting in Dalmeny, Sask., and was later baptized. Helen and Irvin lived their first 3 years on his parents’ farm near Hepburn, Sask., then farmed near Medstead, Sask., until 1952. They raised their family in Saskatoon. In 1985, they moved to Waldheim, Sask., to retire, but Irvin died suddenly one year later. Waldheim MB Church friends supported Helen. In 1988, she married Menno and gained 7 children and 16 grandchildren. Helen and Menno had 2 years together. Helen also mourned her daughter Darlene and grandson John. She served Waldheim MB Church’s Golden Age choir and food committees, volunteered at the Mennonite Clothes Basket, and supported World Vision. Helen’s greatest advice was “always put your trust in the Lord.”