What's New
Through the conflict, life carries on in Ukraine
A FOCUS on Mission
Must Patience Be So Slow?
Harold Jantz: A Heart for the Mennonite Story
Lorlie Barkman: A Life of Creative Engagement
Last Days, First Days
Women in Ministry: Bertha Dyck
January Moment in Prayer “Holy Spirit—Fill Us!”
The Church as the Patient Body of Christ
Advent: Making Much of Jesus: Christmas Day
Home Harry Neufeld 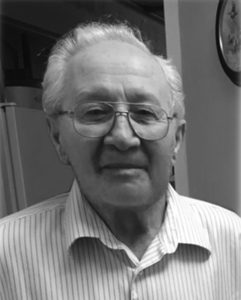 When Harry’s father refused to join the Communist party, he was arrested in 1937 and never seen again. Harry’s mother struggled to provide. Life improved after the Germans took Nikopol in 1941. When the Germans retreated in 1943, Harry’s family travelled with other German-speakers to Litzmannstadt and Warthegau, Poland. As the Soviets advanced, the family went to Mittweide, Germany, where they lived in a basement with 9 other families. In the British Zone of Feldbergen, Harry attended school and worked on a farm. The family sailed to Paraguay on the Charlton Monarch in 1948. In 1955, Harry, his twin Ed, and their mother immigrated to Canada. Harry framed houses in Vancouver. He became interested in his friend Walter’s sister Edith in 1957. Harry and Edith began married life in Vancouver. When their son Martin was in a serious car accident, they moved to North Delta, B.C., to help with the grandchildren. Fishing with family at Mahood Lake, B.C., was special to Harry. He led singing at Culloden Church, Vancouver. His favourite activity was singing with his brothers. Harry had a hip replacement and a stroke in 2013. During an Oct. 2 surgery on a ruptured abdominal aneurysm, a lack of blood flow damaged his organs. Days later, he miraculously regained consciousness to see his family.