What's New
A FOCUS on Mission
Must Patience Be So Slow?
Harold Jantz: A Heart for the Mennonite Story
Lorlie Barkman: A Life of Creative Engagement
Last Days, First Days
Women in Ministry: Bertha Dyck
January Moment in Prayer “Holy Spirit—Fill Us!”
The Church as the Patient Body of Christ
Advent: Making Much of Jesus: Christmas Day
Advent: Making Much of Jesus: Fourth Advent
Home George Wichert 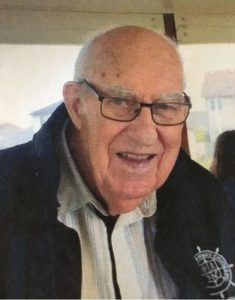 The year before his birth, George’s parents and 3 older siblings had emigrated from Russia; he was the first of 5 born in Canada. In 1935, the family bought land in Niagara-on-the-Lake, where George developed his love of farming. With his 2 older brothers doing alternative service during WWII, George had to support the family. After the war, he finished high school at Eden Christian College (now Eden High School), then in Niagara-on-the-Lake. He attended Waterloo College of Arts (now Wilfred Laurier University), followed by a year of teacher’s college in Toronto, then started his career. In 1954, George married Bertha Dick, whom he’d met in the Virgil Church youth group. After a year of teaching in Ingersoll, Ont., he was invited to return to Virgil and teach at Eden, thus beginning his 32-year career at the school, including 12 as principal. In December, David was born: George spent his Christmas holiday installing a furnace, so Bertha and Dave would have heat when they came home. The family welcomed 4 more children: Nancy, Timothy, Geoffrey, and Suzanne. In 1970, they moved across Virgil to farm 5 acres inherited from Bertha’s father. The cherry and peach orchards became a defining feature of the family, blending the rhythm of pruning, tending, and harvesting with the cycles of the school year. Each summer, weeks at Elim Lodge, Kawartha Lakes, offered reprieve. In 1978, Dave died in a motorcycle accident while travelling Nova Scotia with Tim. George had been ordained in 1964; after retiring in 1987, he and Bertha pastored Mennonite churches in Germany and Virgil. They toured Europe, India, and Africa. Bertha died of cancer in 1997, after nearly 43 years together. The following year, George married Linda Willms, with whom he spent his remaining 24. They ministered with seniors at Cornerstone Community Church, Virgil, 2000–2009. George and Linda travelled Europe, Israel, Alaska, the Mediterranean, and Caribbean. Pennsylvania, Myrtle Beach, and Florida were favourite U.S. destinations; in Canada, they visited family in Winnipeg and Kelowna, B.C., and took Ontario canal cruises. George’s 90th birthday was celebrated with a Caribbean cruise with all 4 children and their partners.