What's New
Through the conflict, life carries on in Ukraine
A FOCUS on Mission
Must Patience Be So Slow?
Harold Jantz: A Heart for the Mennonite Story
Lorlie Barkman: A Life of Creative Engagement
Last Days, First Days
Women in Ministry: Bertha Dyck
January Moment in Prayer “Holy Spirit—Fill Us!”
The Church as the Patient Body of Christ
Advent: Making Much of Jesus: Christmas Day
Home George Thiessen 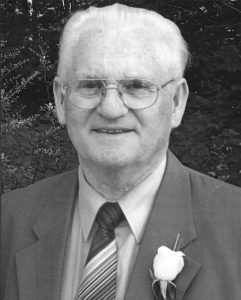 George’s family moved to Gem, Alta., where he met Elizabeth. He enjoyed 37 years teaching in northern B.C.; Morley, Alta.; Calgary; and Surrey, B.C. A successful entrepreneur, George leased recreational vehicles, managed a motel in White Rock, B.C., and owned and operated a travel agency in Surrey. For 2 summers, he built and sold homes. After retiring, he volunteered with Haggai Institute in Maui. George travelled Hawaii, Europe, the Mediterranean, Mexico, and Costa Rica. Many winters were spent with friends in the Ambassador RV Club. In 1992, George and Elizabeth purchased a winter home in Mesa, Ariz. He enjoyed camping with friends and vacationing with his family every year until 2016, when failing health made it too difficult to drive. He was an avid photographer. George played many instruments, but mandolin was his favourite. In retirement, he performed with an orchestra in Abbotsford. George loved to study the Bible and faithfully served the church. He documented his life story in the memoir Moments to Remember. George lived by Proverbs 3:5–6.