What's New
Multiply September Ukraine Updates
Volunteers in B.C. honour Leamington woman tragically killed...
Delete or not to delete, that is the...
Believers bring water for drought baptism
Encouragement to those in the arena
Keeping attention and making an impact: A few...
Open hands to reconciliation
From the editor
Approaching truth and reconciliation with love in our...
MB Seminary offers new MA in Transformational Leadership...
Home George Henry Loewen 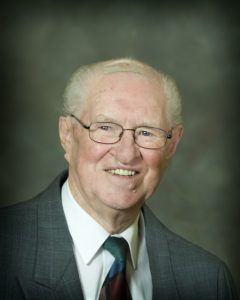 George was born in a Mennonite community in Ukraine. After his father was taken to a labour camp in Siberia, George made the trek across Europe, the Atlantic, and Canada with his mother, brothers, and sister – arriving in Chilliwack, B.C., in 1948. George attended East Chilliwack Bible School, was baptized at Broadway MB Church, and worked throughout the Fraser Valley in farming and construction (stucco). In 1959, he married Herta Thielmann, a pastor’s daughter, and the newlyweds joined Clearbrook MB Church and raised their family. In the late 1960s, the Loewens had an extended visit from George’s father; he died in 1978 in the Soviet Union. A decade later, George buried his dear mother in Vancouver. George and Herta served within congregational life in Lake Errock and South Abbotsford before joyfully returning as seniors to Clearbrook MB. George’s aptitude for numbers opened up a career in bookkeeping and administration. His penchant for neatness and detail rendered beautiful ledgers. In addition to joining church finance committees, he served community associations at Tabor Home, Canadian and American Mennonite Health Associations, Clearbrook (now Envision) Credit Union, Clearbrook Waterworks, Abbotsford Diabetes Association, Association of Christian Schools International–Budapest Office, and Canadian Volunteer Income Tax Program. He was equally comfortable meeting with a board of directors or pouring coffee with the South Abbotsford Church catering crew. George was humbly ready to contribute anything he could to make life better for others. He loved nature: looking out over mountain ranges, oceans, and colourful gardens. He took pleasure in travel, golf, hot springs, walks, a tasty sandwich and friendly conversations over coffee. In his retiring years, his two granddaughters were a particular source of pride and joy. He generously encouraged them with his time, personal attention, and resources. Fun-loving friends and relatives enriched his years. During his final days in hospital, he repeated how thankful he was for their friendship and love. They will miss his companionship and cherish the example of true discipleship he gave. George expressed immense desire to enter eternal life with Jesus – knowing he was richly blessed and dearly beloved.