What's New
Multiply September Ukraine Updates
Volunteers in B.C. honour Leamington woman tragically killed...
Delete or not to delete, that is the...
Believers bring water for drought baptism
Encouragement to those in the arena
Keeping attention and making an impact: A few...
Open hands to reconciliation
From the editor
Approaching truth and reconciliation with love in our...
MB Seminary offers new MA in Transformational Leadership...
Home George Baier 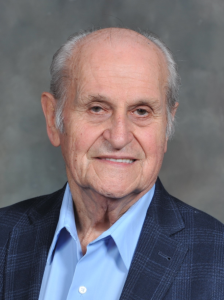 God’s rescuing undergirded George’s faith. When George was one, his father was captured, taken to Siberia, and never seen again. Young George was sickly; the hospital left him to starve. A nurse warned that he would die if he stayed. His mother took him home and God returned him to health. With the Germans’ advance in 1941, George and his mother hid in their mud hut’s basement from Russian police three times. When the German army retreated in 1943, George and his mother were transported in box cars to Germany. God provided work, safety, and the means to escape to Arnold, B.C., in 1948. Here George received Jesus as Saviour and was baptized. He held onto his mother’s example of trust in the Lord. In Vancouver, he began a 3-year apprenticeship as a meat-cutter at Super-Valu and went on to become department manager. George was a youth and sports leader at Vancouver MB Church. Here he met Mary, whom he asked to be his life partner on the mission field. He attended MB Bible College in Winnipeg, where Darlene was born. He became a music minster in Coaldale, Alta., then completed a BA for a teaching certificate in Hillsboro, Kan. God led George and Mary to serve in DR Congo with MB Mission 1969–73, fulfilling the desire God put on George’s heart as a boy. They continued as missionaries in Germany (1975–1982), Austria (2005–2006, 2007), and Peru. When George “retired,” he became board chair of Logos, supporting missionaries in the former Soviet Union. He pastored, both between missions and after returning to Canada in 1982, including at Winnipeg Central MB, Peachland Baptist, Culloden MB, King Road, Chilliwack Central MB, Bakerview, and Clearbrook MB Church. George opened his Bible each morning, after every meal, and before bed. His spiritual life was mirrored by a life of discipleship, evident in his love. George and Mary partnered in everything: devotions, family, ministry, music. Music was George’s vehicle to share God’s message, to mentor others, to share his joy. George had a passion for conducting and for the Heritage Quartet he helped found in 2007. On George’s last day, he preached 1 John 4:4: “Greater is he who is in us than he who is in the world.”