What's New
Multiply September Ukraine Updates
Volunteers in B.C. honour Leamington woman tragically killed...
Delete or not to delete, that is the...
Believers bring water for drought baptism
Encouragement to those in the arena
Keeping attention and making an impact: A few...
Open hands to reconciliation
From the editor
Approaching truth and reconciliation with love in our...
MB Seminary offers new MA in Transformational Leadership...
Home Frank Suderman 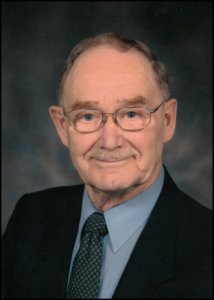 When Frank was under a year, his family immigrated to Stouville, Ont. Frank found school challenging. He had headaches from short-sightedness, stomach aches from nervousness, and problems with bullies. He didn’t return to school after Grade 8. Because the Sudermans spoke German, the community assumed they supported Hitler, which increased difficulties for the family. Frank was involved in vacation Bible school and shared with others the importance of a relationship with God. He worked with his siblings Agnes and Ralph in a vegetable garden earning 50 cents a day. Frank and Ralph joined an MCC boat trip across the Atlantic, transporting horses and cattle to Crete. Frank found his mother’s unexpected death in 1952 and his father’s remarriage difficult. With Agnes’ encouragement, Frank attended Winkler (Man.) Bible Institute. In 1953, at Winnipeg Bible College he met Annie Friesen from Vancouver. They married at Vancouver MB Church, and after the honeymoon, returned to Ontario to take off the crops in the wake of Hurricane Hazel. Evelyn, Luella, and Frances were born in Port Rowan, Ont. After the move to Vancouver in 1959, the family welcomed sons Walter and William. Frank sustained broken ribs and whiplash in a car accident in 1962; the settlement he received enabled the family to purchase their first home. Irene was born shortly afterward. Frank taught himself to play 6 instruments. He conducted choirs from a young age in Port Rowan and continued to do so for decades at Vancouver MB. In 1972, the family relocated to their 3-acre blueberry farm in Richmond, B.C. Seven years later, they moved to Surrey, B.C., where Frank started a hobby farm with chickens, two cows, a dog, cats, and Walter’s horse. Frank worked at Woodwards 31 years. In 1990, Frank and Anne retired to Abbotsford, B.C., with a huge garden: Frank could make anything grow. They travelled to Hawaii, cruised to Alaska, visited Frances in United Arab Emirates, toured Israel, and for their 50th anniversary, took their family to Yellowstone National Park. They fulfilled Frank’s dream of returning to his birthplace. Frank cared for his children and grandchildren, supporting them to attend camp and Bible college.