What's New
A FOCUS on Mission
Must Patience Be So Slow?
Harold Jantz: A Heart for the Mennonite Story
Lorlie Barkman: A Life of Creative Engagement
Last Days, First Days
Women in Ministry: Bertha Dyck
January Moment in Prayer “Holy Spirit—Fill Us!”
The Church as the Patient Body of Christ
Advent: Making Much of Jesus: Christmas Day
Advent: Making Much of Jesus: Fourth Advent
Home Esther Balzer 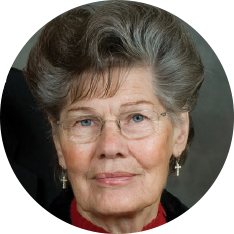 Esther grew up on a farm and studied nursing. It had been on her heart to marry a pastor. At Prairie Bible College, Three Hills, Alta., she met Jake. They married and together pastored MB churches in Winnipeg; Fresno, California; Kamloops, Armstrong, and Mission, B.C. She worked 9 months as a nurse at Woodlands Institution, New Westminster, B.C., then stayed home to care for their daughters. When the girls were teens, Esther did childcare for 3 families, spending hours on the floor, playing. A great cook and baker, she filled her home with the smell of bread and cinnamon buns. She sewed many clothes for herself and her daughters, including for their weddings. Esther poured out her love on her grandchildren. She and Jake had devotions together, praying daily for family, friends, and missionaries. Esther joined the women’s ministry at Central Heights Church and assisted in the library at Clearbrook MB Church. She answered calls at Telecare Crisis Line, assembled blankets for MCC, and worked at the MCC Thrift Shop. In her 70s, Esther helped her sisters-in-law with shopping, transportation, and personal care. In her 80s, she continued driving others to appointments. She declined chemotherapy and radiation for multiple myeloma. Though the pain in the end was excruciating, Esther continued to care for Jake and be strong for her children. She was an example of love, generosity, thankfulness, perseverance, and faith in Jesus.