What's New
A FOCUS on Mission
Must Patience Be So Slow?
Harold Jantz: A Heart for the Mennonite Story
Lorlie Barkman: A Life of Creative Engagement
Last Days, First Days
Women in Ministry: Bertha Dyck
January Moment in Prayer “Holy Spirit—Fill Us!”
The Church as the Patient Body of Christ
Advent: Making Much of Jesus: Christmas Day
Advent: Making Much of Jesus: Fourth Advent
Home Erna Peters 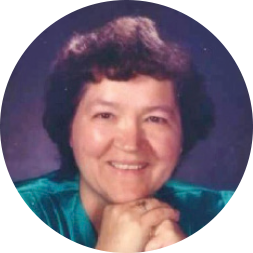 The child of German-speaking immigrants from Poland, Erna was unable to speak English when she began school, but she learned quickly and taught the rest of her family. She was also a talented, self-taught musician. She committed her life to Christ and was baptized into a Pentecostal church. Erna finished schooling after Grade 8, since there was no local high school. After a year of Bible school in North Battleford, Sask., Erna worked in the Spiritwood Hospital laundry until she married John Poor and moved to his farm. When generating viable income became too difficult, they took the opportunity to move to Williams Lake, B.C. They purchased a home on Frost Creek, where they built a convenience store and gas station and took in forestry workers, for whom Erna served as cook, laundry worker, and dispenser of spiritual advice. Erna was an avid gardener. With her great compassion, she joyfully fostered numerous children, many of them infants. After John’s death, she moved to Brazil to care for abandoned children with a Canadian-based evangelism team. Finding the climate adverse to her health, she reluctantly returned to B.C. During the difficult years following her kidney cancer diagnosis, she committed to prison ministry, offering her music and fellowship. In Abbotsford, she met and married John Peters, with whom she travelled in their early years. As his health slowly declined, Erna devoted her final years to assisting him, and to enjoying her children, grandchildren, and great-grandchildren.