What's New
A FOCUS on Mission
Must Patience Be So Slow?
Harold Jantz: A Heart for the Mennonite Story
Lorlie Barkman: A Life of Creative Engagement
Last Days, First Days
Women in Ministry: Bertha Dyck
January Moment in Prayer “Holy Spirit—Fill Us!”
The Church as the Patient Body of Christ
Advent: Making Much of Jesus: Christmas Day
Advent: Making Much of Jesus: Fourth Advent
Home Erika Wall 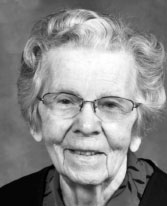 When Erika was 4, Communist authorities expropriated her homestead. Her family moved to a remote village in Russia. When she was 7, the family caught the last train out of Moscow in 1929 and entered Germany. In 1930, they immigrated to Brazil, living in a jungle hut with a thatch roof on the Stoltz Plateau. After 5 years, they moved to Curitiba, where many Mennonites ran dairy farms. Erika and her family delivered milk at 3 a.m. in the city. After moving to Sao Paulo, Erika became a nanny at 15. She attended Bible School with C.C. Peters as instructor. In 1959, Erika and her parents immigrated to Canada to join her brother. She did domestic work and worked 18 years in the Vancouver Children’s Hospital kitchen. After her father died, Erika cared for her mother, who had a stroke, in Abbotsford, B.C. Erika married Henry, and her mother lived with them until she died at 104. After Henry’s death in 1990, Erika immersed herself in church, where she met Jacob in 1996. Both loved and served Jesus and each other. When Jake died, she found consolation in helping others in her condo. Failing eyesight was a great trial. In 2014, Erika had a severe stroke, which she wasn’t expected to survive. She moved to a care facility and kept mobile with a walker. She missed attending church. Erika cracked her pelvis in a fall and died of resulting infections.